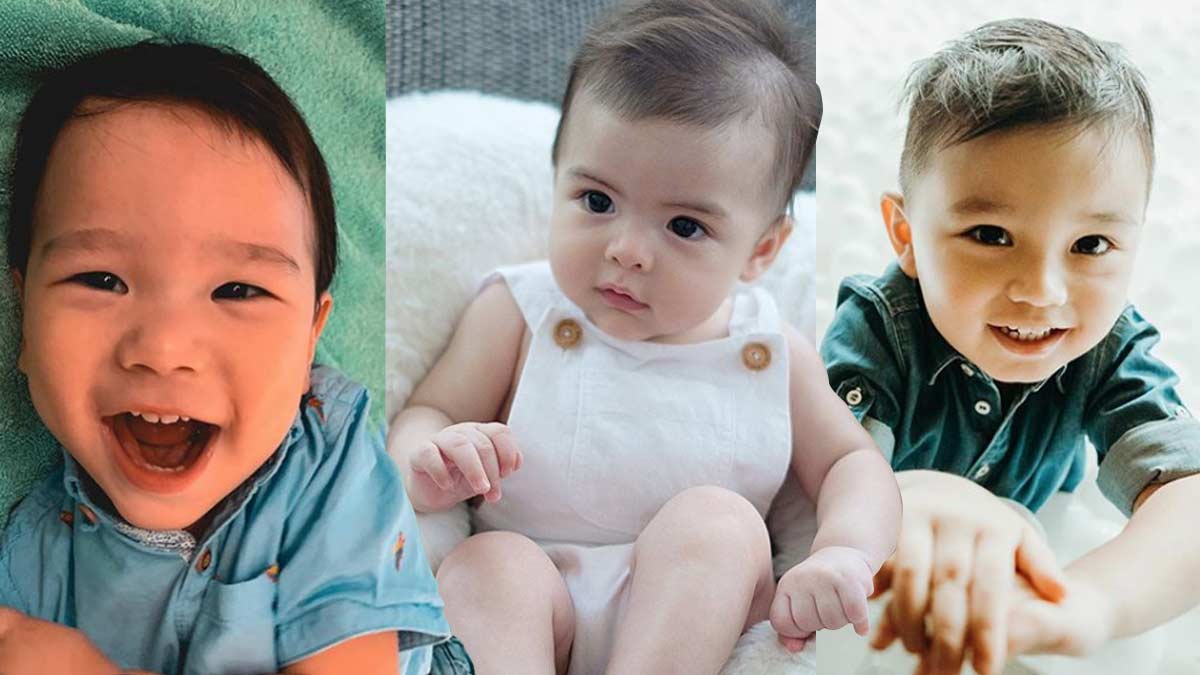 As young as they are, these photogenic infants and toddlers have taken hold of social media on their own, thanks to their adoring parents.

Who knows what the future holds for these cute kids of celebrity parents.

Based on the huge number of their Instagram followers, they are winning hearts.

But will they grow up to be heartthrobs as well?

PEP.ph (Philippine Entertainment Portal) is betting on it, and here they are, the future celebrity baes.

Ziggy instantly became a social media star when Marian and Dingdong introduced him on Instagram.

This post has reached one million likes to date.

And with each new posting, Ziggy, like his older sister Zia, attracts more than 100,000 likes on Instagram.

They may be thrilled by all the spoiling their children get on social media, but Dingdong and Marian are keeping a tight rein on Ziggy and Zia.

Meanwhile, Marian said in a September 2019 interview that their studies will come first.

Drew and Iya never expected the popularity of their first son Primo on social media.

The dad thinks it is because his boy is a "happy kid."

The GMA-7 host said in an April 2019 interview, "It's easy for me to capture that moment whenever he's eating Nutripops or when he's taking a bath and he's having fun or when he's with the mom and playing sa mat.

"It's just easy for me to take shots and post everything sa social media.

Drew and Iya have two sons—their second son Leon was born in 2018—and they do regulate what they post on social media about them.

"So, it's about what content we put out and hopefully it's mostly inspirational and aspirational."

Pancho's birth story was an emotional one, as the newborn spent months in the Neonatal Intensive Care Unit and lost his twin sister Luna.

Fans follow the hashtag #DailyPancho, which Saab regulates and updates.

They have come to know him as a strong baby who brings happiness to his parents.

The one-year-old boy became a big brother to his newborn sibling Vito in September 2019.

Aljur and Kylie became parents when their first son Alas Joaquin was born in August 2017.

In a few weeks, the two-year-old boy will become a Kuya to a baby brother named AR.

Showbiz fans see Seve appear on Toni or Paul's Instagram accounts every now and then.

But now that Toni has opened her own YouTube channel, showbiz fans get to see more of her bonding moments with Seve.

Toni told PEP.ph in June 2018, "I would want him to pursue a different path, different career.

"But, you know, I don’t want to control him also so whatever it is that his heart desires, we will support it fully."

People also read: 20 celebrity kids who are non-showbiz but so darn good-looking (2017 edition)

Blue-eyed Archie has the looks of his British dad and the heart of a Pinoy.

Remember when Archie was looking for adobo or when he said, "Lamok?" in his small voice?

It took months before Isabelle introduced her son Baltie Semblat on Instagram.

Knowing fully well a celebrity kid is born into the spotlight without a choice, being the daughter of Miss Universe 1969 Gloria Diaz, Isabelle is careful about exposing Baltie on social media.

A mental health advocate, she is aware that oversharing can affect a child's self-esteem and psyche.

Apart from her fashion and travel photos, Liz posts about her life as a mother to two-year-old Xavi.

Xavi was born in September 2017 and made headlines in 2018 when his celebrity stylist mom finally decided to introduce him to her social media followers.

When Sarah gave birth to her second son Kai, the now mother of two said her newborn looked exactly like her first son Zion.

But apart from having two handsome sons, the 26-year-old celebrity mom is thankful to find two best friends in them.

She and long-time partner Richard welcomed Kai in March 2018, and will be married soon.

Early this year, Korina and Mar surprised their followers when they announced the arrival of their twins Pepe and Pilar.

It was a dream come true for the married couple, who spent years wanting to have kids of their own.

For the past eight months, Korina's Instagram feed has been full of moments of her little bundles of joy.

Freedom is the first boy to carry the Prats family name in his generation, an answered prayer for John and his dad Daniel.

Freedom was born in November 2018.

John and Isabel's first child Feather was born in April 2016.

People also read: 25 celebrity kids who are so darn good-looking but are not in showbiz

Baz is short for Basquiat Delfin.

Divine got the name "Basquiat" from the American artist Jean-Michel Basquiat, while "Delfin" came from her dad.

Hunter James was born prematurely and confined in the hospital for 20 days.

Because of breast milk, he gained more than seven kilos—from 2.3 to 9—in six months.

This was posted by his mom in December 2018:

"Everyone asks, what vitamins he's on. The answer is: NONE. It's pure breastmilk"

One look at two-year-old Jace and it is clear that the little boy may grow up to be like his dad, Taekwondo practitioner Japoy Lizardo.

Many may remember Japoy from his stint as one of the sports personalities who endorsed a popular chocolate and malt drink. This commercial from the early 2000s made him an instant heartthrob to a generation.

Elijah is a miracle boy for Miriam and Ardy.

The former Miss Universe candidate was 43 when she found out she was pregnant.

Michael James or MJ is a big brother to his sister Francesca.

More than a year after Wendy revealed that her son Seth has spina bifida, the two-year-old boy remains strong.

With models Regine and Van as his parents, two-year-old Alesso may just become a model himself in the future.

She has always wanted to be "surrounded by good looking men", so she decided to "have and raise them" herself.

Isaiah, 5, is her son with former partner Bernard Palanca.

Daniel and Michael are her sons with Spanish husband Miquel Aguilar.

In July 2019, Jerika and Miquel welcomed their third son, Moses.