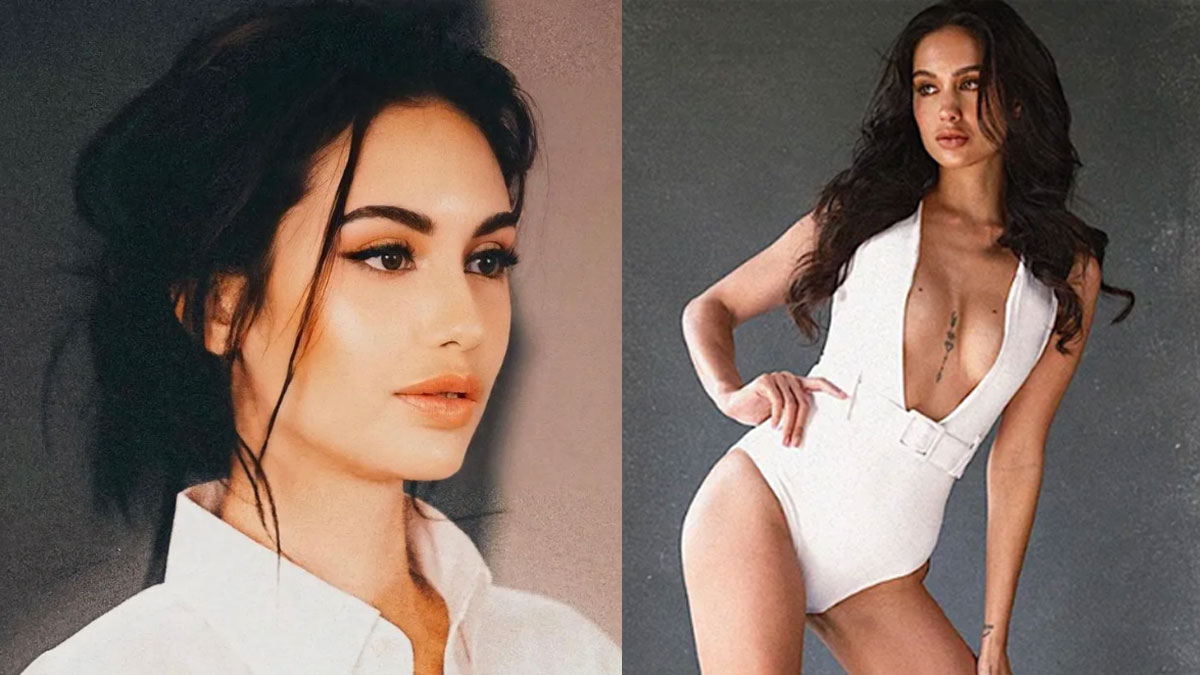 Miss Universe Philippines 2022 Celeste Cortesi: "I am beyond honored and grateful to be able to represent my country on the Miss Universe stage."
PHOTO/S: @celeste_cortesi on Instagram

Miss Universe Philippines 2022 Celeste Cortesi couldn’t have chosen a more fitting inspiration to spark that beauty-queen dream inside her.

In 2015, then 17-year-old Celeste watched in awe as Pia Wurtzbach put an end to the Philippines’ 42-year Miss Universe title drought, albeit in controversial fashion.

“That was the first pageant that I ever watched, Miss Universe 2015. After that, I started to be curious about it. I was still living in Italy… I was just curious about pageantry.

"I was very amazed about the performance of Pia and it was very inspirational that I got interested,” Celeste said in a chat with The Qrown Philippines on YouTube.

Now, the Filipina-Italian beauty queen is taking a shot at that coveted yet elusive crown, and she hopes to walk the same path taken by Pia and three other Filipino Miss Universe titleholders—Gloria Diaz (1969), Margie Moran (1973), and Catriona Gray (2018).

Born on December 15, 1997, Silvia Celeste Rabimbi Cortesi grew up in a multicultural household.

Her father is Italian, while her mother is a Filipina who hails from Camarines Sur.

However, as she was growing up, Celeste didn’t pay much attention to her Filipino roots.

She worked as a store cashier in the city of Parma in Italy.

The young stunner also dabbled in modeling to complement her day job and help pay the bills.

But fate had bigger plans for Celeste.

Eventually, Celeste developed an interest to know more about her Filipino roots.

This curiosity led her to explore the possibility of trying her luck in beauty pageants.

Celeste had a lot of things going for her—height, looks, charisma, modeling experience—that made her a beauty-queen material.

She also didn’t have to look far for support and encouragement.

Celeste’s mother, Maria Luisa Rabimbi, pushed her daughter to listen to her heart and follow her dreams.

She had her mother's nod when she left Italy to explore her Filipino roots, never mind if that meant having to live far away from each other.

“If I could stop time, I would spend it with my family, especially my mother. It's been two years that I didn't see my family because they live in Italy, and I came here to the Philippines just by myself,” Celeste said during the Q&A of the Miss Universe Philippines pageant on April 30, 2022, at the Mall of Asia Arena in Pasay City.

“So if I had a chance to spend one day, I would definitely be with my mom and I would just tell her how much I love her and I miss her.”

Celeste’s first taste of pageantry did not happen in the Philippines but in Rome, Italy.

She joined the Miss Philippines Earth-Italy pageant in 2018 upon the encouragement of her supportive mom.

Celeste’s victory set the wheels in motion for her to fly to the Philippines to compete in the Miss Earth Philippines 2018. The pageant was held at the Mall of Asia Arena on May 19, 2018.

It was a triumphant campaign as Celeste bested 41 other participants to take home the crown and the honor to represent the Philippines at the Miss Earth 2018.

Celeste managed to hold her ground against participants from other countries.

Nguyen Phuong Khánh of Vietnam won the title to succeed 2017 titleholder Karen Ibasco from the Philippines.

Despite failing to win the crown, Celeste was able to make it to the pageant’s Top 8 alongside Italy, Portugal, and Venezuela, among others.

The road to Miss Universe

With the Miss Earth pageant behind her, Celeste set her sights on the biggest prize of all.

It was in April when Celeste’s name emerged as among those vying for this year’s Miss Universe Philippines title.

Representing the city of Pasay, Celeste was among the favorites touted to take home the coveted crown.

Celeste didn’t disappoint as she racked up numerous awards, including Best in Swimsuit and Miss Photogenic, asserting her strong showing throughout the pageant.

“I gave my best tonight and all the hard work has paid off. Am excited for what’s next. I cannot wait to start my training, I cannot wait to work with the organization. This is what I wanted for a long, long time,” she said excitedly after the event.

Celeste’s newfound fame brought along public scrutiny of her every move.

She was a controversy magnet right from the moment she burst onto the scene four years ago.

Her reign as Miss Philippines Earth was far from smooth sailing.

It was reported that some Filipinos in Italy were not happy with Celeste’s victory as Miss Earth Philippines-Italy, citing a video that allegedly showed the beauty queen teaching someone how to say curse words in Italian.

Then there was Celeste opting to skip the Miss Philippines Earth 2019 coronation event on July 10, at The Cove in Okada Manila in Parañaque.

She was supposed to pass her crown to the eventual winner and her successor, Janelle Tee from Pasig.

“As most of you know, yesterday (Tuesday) I had a very bad allergy and following the advice of my doctor I’ll not be able to attend the coronation of Miss Philippines Earth,” Celeste wrote in an Instagram post to explain her absence.

She added, “All I want to say is thank you for all the love you guys gave me during my journey. Good luck to my next successor I wish you all the best!”

However, many pageant enthusiasts raised their eyebrows and accused the Italian beauty of being a “diva” and questioned her professionalism.

Celeste's romantic liaisons also hit the news. She was once linked to game show host Willie Revillame, and had dated actor Joseph Marco.

She is currently in a relationship with Filipino-British football player Matthew Custodio.

The 24-year-old winner is aware of the so-called “curse” that doomed the romance of past Miss Universe Philippines titleholders after they won the crown.

“I just want to say to these people, you know, there is a curse apparently, but it’s not gonna work on us,” she said during an online interview with the media.

“You know, whenever we read these comments, we always laugh about it because Matthew has been supportive during my journey, that, you know, it’s just so amazing.”

But her focus at the moment is winning her next crown.

This is another step in Celeste’s colorful journey, one that began with a dream born seven years ago as the country erupted in jubilation to celebrate its return to the top of the Miss Universe.

Will Celeste pull off another magical finish to cap off her pageant run, just like Pia Wurtzbach in 2015?

“I’ve grown so much since I came to the Philippines five years ago, and I really promised myself that I would only join a pageant when I am ready to take on the responsibility of a crown, and I am now,” Celeste said on social media a day after winning Miss Universe Philippines.

“Yesterday, I’ve received my second chance and I am beyond honored and grateful to be able to represent my country on the Miss Universe stage.

“I hope that with my story I can inspire so many to never give up on their dreams because through hard work, perseverance, and faith you can achieve anything you want.”