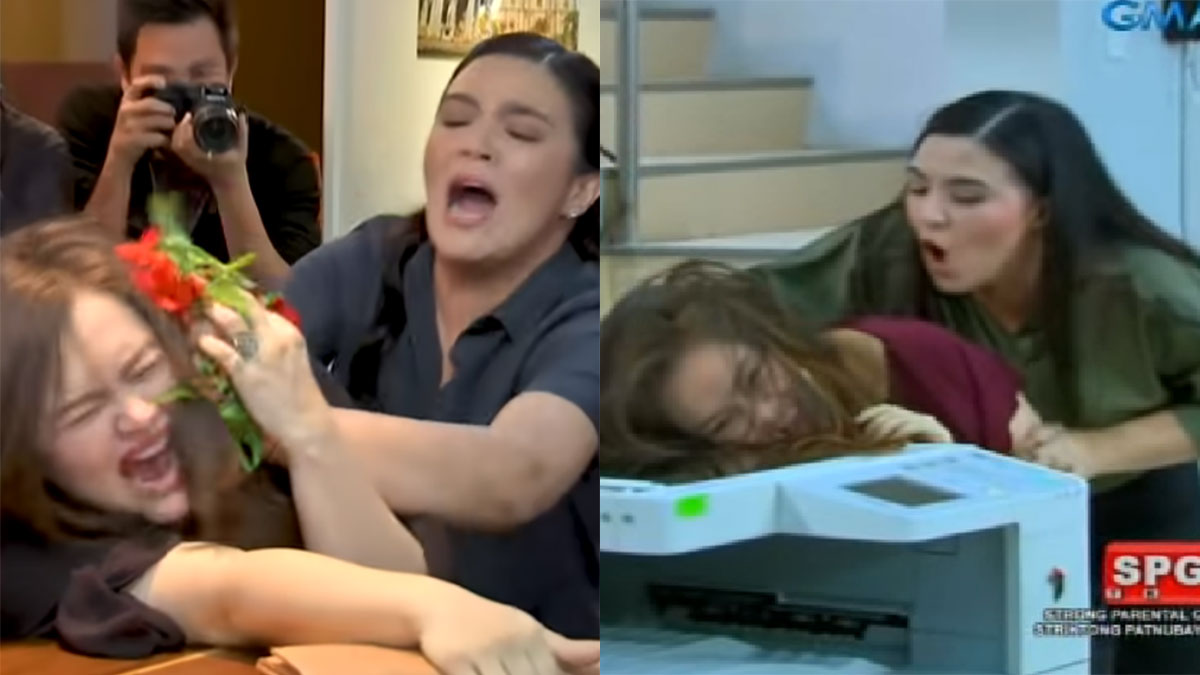 Doing these scenes don't seem to be a problem for these two GMA-7 actresses, because they have been working together since 2000. They started out via the miniseries, Umulan Man O Umaraw.

Inagaw na Bituin is the fifth TV project of Sunshine and Angelika.

This is also the observation of their Inagaw na Bituin director, Mark Reyes, who spoke to PEP.ph (Philippine Entertainment Portal) during the press conference for Mystified last March 12.

He pointed out, "Kasi they worked with each other na, so they know the numbers, parang very technical for them na.

"So, they don't hurt each other and then if they feel na kung kulang, dadagdagan pa nila. So, that's the nice thing about it."

The only difference is that Sunshine and Angelika already use "weapons" in their fight scenes.

For this reason, some netizens playfully commented that Inagaw na Bituin is the "sequel of Ika-6 Na Utos."

With Angelika and Sunshine once again thrust into the same genre, PEP.ph lists down five of their campy but entertaining confrontation scenes in Inagaw na Bituin and Ika-6 Na Utos.

In this scene, aired on Inagaw na Bituin's 19th episode, Lucy (Angelika) was outraged upon learning that Belinda (Sunshine) took over her supposed coaching stint in the fictional contest, "The Brightest Star."

Instead of giving Belinda a kiss, Lucy greeted her sister by choking her.

Belinda was surprised by her sister's attack, especially since she was unaware that she replaced Lucy on the show.

Lucy angrily said that she gave up other jobs just to get that stint.

Lucy became even more outraged by Belinda's answer. Lucy then grabbed a guitar and tried to hit Belinda.

Belinda was able to avoid the guitar, and left the venue to escape her sister's wrath.

In Episode 13, Belinda found out that Lucy stole all her money and sold her house!

Belinda was so infuriated by this information that she rushed to Lucy's gig and confronted her.

Lucy turned her back at Belinda to avoid the topic, but Belinda pulled her.

Lucy furiously threw music sheets at Belinda, slapped her, and pushed her towards a flower pole.

Belinda grabbed flowers from the pole, and slammed them onto Lucy's face.

The catfight only ended when their mother, Aurora (Jackie Lou Blanco), stopped them.

The photocopying machine scene in Ika-6 Na Utos was the first confrontation scene Sunshine and Angelika did for the Kapuso afternoon series in 2017.

This project served as the TV comeback of Angelika who took a short hiatus from showbiz.

Set in an office, the fight scene started when Sunshine's character, Emma, confronted Angelika's Geneva after a failed murder attempt.

Geneva was infuriated by Emma's accusations. For this reason, Geneva slapped Emma, prompting the two to engage in a physical confrontation.

Emma threw a puncher at Geneva's face and slapped her repeatedly.

Their confrontation only stopped when Flor (Rich Asuncion) took Emma to another room.

In this Ika-6 Na Utos confrontation scene, Emma and Geneva had a face-off at a party organized by Angelo.

Emma accused Geneva of stealing Angelo from her, but Geneva kept on denying it.

Emma was referring to her nemesis, Georgia (Ryza Cenon), who at that time has not been revealed yet as Geneva's long-lost sister.

Geneva responded by grabbing a plate of white sauce and throwing it at Emma's dress.

Emma pushed Geneva and slapped her, causing Geneva to land on the buffet table with her face dunked on a bowl of melted cheese.

Before giving her a slap on the face, Geneva shouted at Emma, "You bitch!"

The two women then engaged in a brawl that resembled a MMA fight. They threw each other across tables and at point, Geneva grabbed a knife and attempted to slash Emma!

The fight was only stopped when Angelo arrived at the venue just as Emma was choking Geneva.

In this confrontation scene, Emma went to a playground to see Sidney (Angelica Ulip), Geneva's niece.

Geneva caught the two of them talking, and immediately sent Sidney inside her car.

Geneva warned Emma to stay away from her niece.

Geneva then accused Emma of being a gold-digger.

A long fight scene then happened, with Emma and Geneva using the playground's facilities to injure each other.

They were only stopped when guards arrived at the playground.

Since Ika-6 Na Utos became popular for its campy fight scenes, the creators are consciously veering away from this formula in Inagaw na Bituin.

Direk Mark told PEP.ph, "I think so, because ang very aware niyan are the writers.

"Some of them, I think, were writers of Ika-6, so they are very careful with that."

He also disclosed that more catfights, including those involving the characters of Kyline Alcantara and Therese Malvar, are yet to be seen in Inagaw na Bituin.

PEPsters, which Sunshine-Angelika confrontation scenes are better: the ones from Ika-6 Na Utos or Inagaw na Bituin?