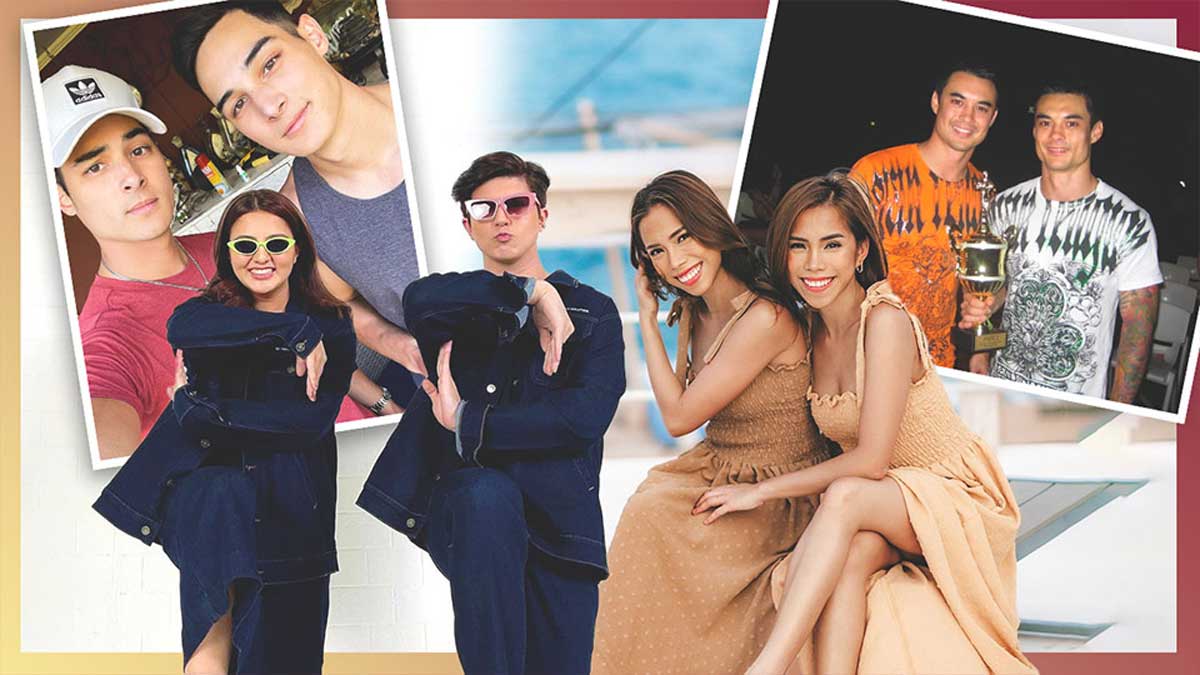 (L-R) Tyler and Tanner Mata, Cassy and Mavy Legaspi, Joj and Jai Agpangan, and Brad and Greg Turvey are among the twins that made a mark in the local entertainment scene.
PHOTO/S: PEP File

There have been many famous twins, as rare as they come. The country boasts some of them, a few from the world of entertainment.

For fans and celebrity watchers, following them is double the fun.

In the same year, the nine-member band joined the roster of nominees for Best Southeast Asia Act at the MTV Europe Music Awards.

With their shared love for flowers and all things "designer," Jinkee makes sure to include her twin in most of her adventures.

The stylish sisters also love to travel and stroll in twinning outfits.

Siblings Cassy and Mavy Legaspi are following in the footsteps of their parents Carmina Villarroel and Zoren Legaspi in the world of showbiz.

The 21-year-old twins are currently making their own name in the industry under Sparkle, formerly known as GMA Artist Center.

While juggling work and studies, Mavy appeared in the prime-time series I Left My Heart in Sorsogon, top-billed by Heart Evangelista, Richard Yap, and Paolo Contis.

Cassy, on the other hand, reprised her role as Nina Acosta in First Lady, the sequel of First Yaya.

The equally charming and talented twins also share the same group of celebrity friends as seen on their social media accounts.

Atasha and Andres are the only children of actor-TV host Aga Muhlach and Binibining Pilipinas Universe 1994 Charlene Gonzalez.

Although they've opted to be under the radar, the 20-year-old twins have appeared in some TV commercials and have graced the covers of magazines over the years.

They also did some modeling for a local fashion brand.

Currently, both are abroad for their studies.

Born through gestational surrogacy, Pilar and Pepe Roxas are the adorable twin babies of Mar Roxas and Korina Sanchez.

The three-year-old twins never fail to cheer up their mom’s Instagram followers through their funny faces and candid pictures.

After their stint in the ABS-CBN reality show Pinoy Big Brother Teen Edition 4 (2012), twins Joj and Jai decided to pursue a showbiz career together.

The dynamic duo appeared in some Kapamilya shows such as Forevermore (2014), The Good Son (2017), and several episodes of the weekly drama anthology Maalaala Mo Kaya.

In 2019, Joj and Jai celebrated another milestone together, having graduated with a degree in Education from the University of the Philippines Open University.

Aside from being influencers and food business owners, the two ladies also give their supporters a peek into their daily life by sharing their travel escapades and skincare routines through their Youtube channel.

Much like their dad Eddie Guttierez and mom Annabelle Rama, showbiz royalties Richard and Raymond Gutierrez have found fame in different areas.

Raymond, on the other hand, wears many hats—he is a famous host, editor, entrepreneur, and creative consultant. He is currently based in the States.

While Fifth is making a mark in the industry as a director, writer, and actor, his twin Fifth has gone in another direction and is a food business owner.

In 2020, Fourth married his long-time girlfriend, model Grizelle Gratela, in an intimate ceremony at the Las Casas Filipinas de Acuzar in Quezon City.

Fifth, for his part, recently revealed his relationship with a gamer.

International models Tanner and Tyler Mata have more than just their looks in common.

The Filipino-American twins also share the same interest in street racing. Both are also not big fans of running.

Tanner was one of the regular housemates in Pinoy Big Brother: Lucky Season 7. His twin brother, Tyler later entered the house to participate in a challenge as a guest.

In 2020, Tanner and fellow PBB housemate Maria Fabiana got engaged, which took place on a cruise in Lake Minnetonka in Minnesota, USA.

The couple's wedding-inspired shoot in Dubai also made the rounds online.

Felix and Dominic Roco take after their dad, the veteran actor Bembol Roco.

Felix’s exceptional portrayal in Engkwentro (2009) paved the way for the movie to be recognized internationally. Engkwentro bagged the Horizons Orizzonti Prize for new trends in cinema and the Lion of the Future—Luigi de Laurentiis award at the 66th Venice Film Festival in 2009.

Dominic, on the other hand, played the lead in the indie favorite Ang Nawawala (2014) with Marie Jamora at the helm.

Although they are identical, their personalities are distinct from each other. Dominic has described his twin brother as outgoing and adventurous while he tends to be quiet and reserved like their dad Bembol.

The twins’ ticket to fame was their hit TV commercial for a detergent soap back in the 1990s to early 2000s.

Dubbed as "Lumen’s twins," Charlotte and Charice made their TV comeback through the Kapuso series Inday Will Always Love You (2018), which starred Barbie Forteza and Derrick Monasterio.

Currently, the twins are part of KAIA, the sister group of P-pop stars SB19. Their pre-debut single, "KAYA" was produced by Hang Seung-Taek and Lee Oh-Won who worked with K-pop acts such as SHINee’s Taemin, Stray Kids, Wanna One, and TVXQ.

Jaja and Boom-Boom (The Jaboom Twins)

Following their 2004 hit song-and-dance combo, the twins appeared in several Kapamilya and Kapuso sitcoms. They also did a hosting stint in the Kapamilya network's now-defunct noontime show Magandang Tanghali Bayan (2005).

In 2006, the duo played as Luntian and Violeta in the third installment of the Kapuso telefantasya series Encantadia: Pag-ibig Hanggang Wakas.

Boom-Boom, also known as Kristine Gonzales, took on a supporting role in the movie Eternity (2006).

Currently, Jaja is a mother of two, while Boom-Boom has three kids with Parañaque City Councilor Juvan Esplana.

You may know Nathan Lopez from his brilliant performance as Maxi in the 2005 independent film Ang Pagdadalaga ni Maximo Oliveros.

The actor portrayed the title role of Maximo—a 12-year-old gay teen who lives in the slums of Manila with his criminal family. The film made a mark in the international scene and won several awards locally and globally.

Nathan has a twin brother named Gammy who also played his identical gay twin in the Maalaala Mo Kaya episode titled "Heels," which aired in 2013.

Based on their social media accounts, both Nathan and Gammy have pursued freelance work in production. They are also both into diving.

Brad rose to fame after his collaboration with Hollywood star and singer Mandy Moore for a clothing brand back in 2001.

Stepping away from the limelight, Brad and Greg opened their own restaurant Knox Dining at the Surfers Paradise in Australia's Gold Coast.

Brad is now enjoying fatherhood with his partner Adelle Shea, whereas Greg keeps his private life off social media.

Prior to doing music, the rising duo played basketball and tennis as varsity players. They won the Grand Prix Doubles tennis competition together.

Their most recent project is the youth-oriented show titled Kaibigan: The Series which also starred Janina Vela and Lianne Valentin. The series aired on GMA-7 in December 2020.

The former VIVA Hot Babe has a twin brother, whom she fondly calls "my wombmate."

But Adrian chose not to join his twin Andrea in showbiz, and is presently based in the U.S. 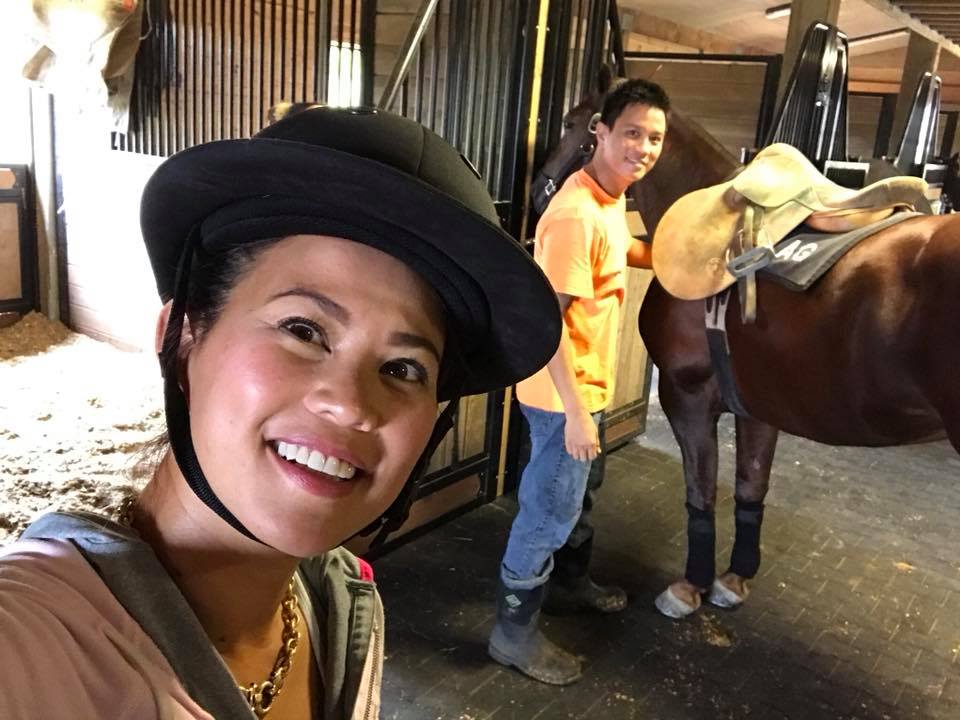